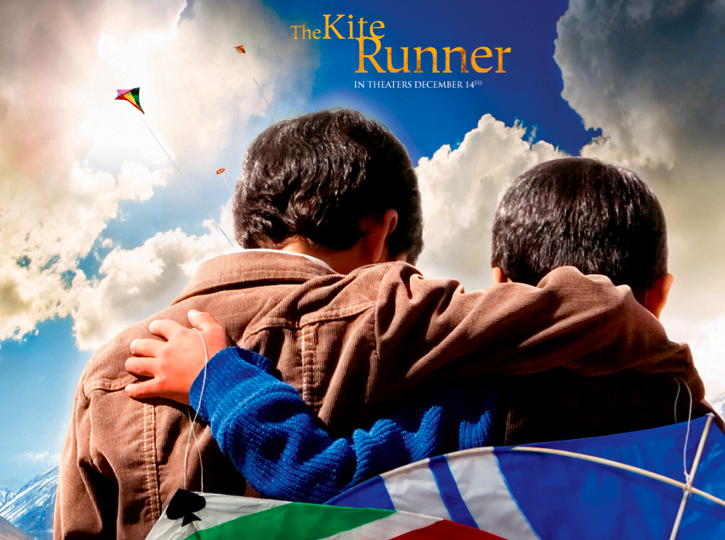 1. Due to Afghan mores concerning male rape, Paramount Vantage agreed to relocate the young actors out of the country to the United Arab Emirates and arrange visas, housing and schooling for the young actors and jobs for their guardians. Paramount Vantage accepts responsibility for the living expenses until they reach adulthood, a cost some estimated at up to $500,000.

2. Author Khalad Hosseini describes the filming (in Kashgar, China) of the Kabul kite tournament scenes: "There weren't actually any kites in the sky. We were just kind of looking up at these strings going up to these cables and hanging from the other side there were water bottles to give the string a sense of tension." To which director  Mark Foster adds "Yes, because we had no wind." CG kites were added in post-production.

3. Screenwriter David Benioff mentions on the DVD commentary that what Uncle Saifo the kite seller says in Dari is completely different from what is shown in the English subtitles. Director Mark Foster adds that the improvisation technique was common among the Afghan actors, many of whom weren't really actors.

4. In the book the servant boy, Hassan, was a harelip (cleft upper lip), but that was left out of the film because it would have required two hours of makeup every day, it would have been difficult for the boy to act in the makeup, Director Mark Foster didn't want to put the boy through it, and it wasn't essential to the script.

5. Director Mark Foster mentions in the DVD commentary that his passion to make the film as authentic as possible was responsible for his insistence on filming Afghanistani characters speaking in Dari (with English subtitles). Author  Khaled Hosseini says "Iran and Afghanistan share a language - they call it Farsi in Iran and we call it Dari in Afghanistan - it's essentially the same language, but the accent is very different." He mentions that the speaker at the soccer game is speaking in Pashdu, the other main language of Afghanistan.

6. The scenes ostensibly taking place in Afghanistan were mainly shot in the cities of Kashgar and Tashkurgan in the Xinjiang region of China (officially the Xinjiang Uygur Autonomous Region). The DVD commentary mentions that scenes shot in Kashgar include the kite tournament, the mosque where Amir prays, and Rahim Khan's apartment in Peshawar, Pakistan. Scenes shot in Tashkurgan include the opening scenes of a kite duel and the boys running the kite, the Pomegranate tree, and the Taliban compound where Amir meets Sohrab. Scenes shot in or outside of Beijing include the wedding and the soccer match. The San Francisco bar scene was also shot in China.

7. Author Khaled Hosseini mentions in the commentary that the name on the door "Dr. Amani" is his homage to his medical school roommate. He mentions in the documentary "Words from the Kite Runner" also on the DVD that he, himself, was a practicing physician for eight and a half years before choosing to concentrate on writing after 'The Kite Runner' book became successful.

8. Assef's character is white with blond hair in the book, but he is brown with black hair in the movie.

9. Release prints were delivered to theaters with the fake title 'Playground Bully'.

11. The film sound track was composed by Alberto Iglesias, a Spanish  composer and he was the first to be nominated for  the Academy Award

1.    How does the real Assaf look like?
2.    Where is the mosque where Amir prays?
3.    Which language do Iran end Afghanistan share?
4.    Who was a harelip in the book, but he wasn’t in the film? Why?
5.    Where were the two young actors relocated and why?
6.    Why were water bottles used in the kite tournament scene?
7.    Who composed the sound track?
8.    Look for a map of Afghanistan. Find out which is its capital and which are the bordering countries?
9.    In the film you can see that at the end of the 70s the Russian army was in the country, why?

10. How many books did they sell in the last 8 years?
11. Who are the Taliban?
12. What is the Sharia?
13. What is the political situation of Afghanistan at present?
14. Write a short description of Amir Jan and Hassan.
15. Find out the meaning of these words: Mulas, Pashtunes, Hazara, Kebab,
Saur Revolution.
16. Was there a theatre version of the novel?

1.    Which character do you like best and why?
2.    What do you think of the relationship of Amir and his father?
3.    The kites in the film have an important meaning. What do you think it is?
4.    Which is your opinion on how women and children are treated in the Afghanistan society?

Here below you can read some of the Human Rights articles. Can you remember any scenes in the film in which these rights are not respected.


Everyone has the right to education.
Posted by anna klein at 9:58 AM

Email ThisBlogThis!Share to TwitterShare to FacebookShare to Pinterest
Labels: 4 ESO 14-15